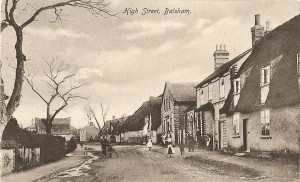 Balsham is a large parish lying to the south-east of Cambridge, and covers 1831 hectares. The land rises from the A11, in the north of the parish, through undulating farmland to the site of the village, in the south of the area.

The village extends mainly along one road and has the church at the highest point. Roman roads form the west and south boundaries, Fleam Dyke is to the east, and one of the Icknield Way tracks is the northern boundary. In the Domesday Book Balsham is called Balesham: the village of Baelli.

The housing in the village is a mixture of old cottages, some dating from the sixteenth century, interspersed with newer houses and more modern developments of Closes. The biggest expansion began in the 1960’s when much of the land between the houses (fields and larger gardens), was acquired for building. The population of the village at present is about 1600.

The village has a primary school, post office, butcher’s shop and dairy, and two pubs: the Bell and the Black Bull. The local farming is mainly arable: wheat, barley, sugar beet and rape are the main crops, and sheep and cows are held on one farm.

The village has a thriving community with many clubs, societies and groups meeting regularly in halls and homes, and there are also football teams for several age groups and cricket teams, which all meet on the recreation fields.

The village is in the centre of the triangle formed by Cambridge, Newmarket and Haverhill, which provide the main centres of employment and shopping. There is also some small industry in the village, and several crafts and trades are pursued from local homes.

We use cookies on our website to give you the most relevant experience by remembering your preferences and repeat visits. By clicking “Accept All”, you consent to the use of ALL the cookies. However, you may visit "Cookie Settings" to provide a controlled consent.
Cookie SettingsAccept All
Manage consent

This website uses cookies to improve your experience while you navigate through the website. Out of these, the cookies that are categorized as necessary are stored on your browser as they are essential for the working of basic functionalities of the website. We also use third-party cookies that help us analyze and understand how you use this website. These cookies will be stored in your browser only with your consent. You also have the option to opt-out of these cookies. But opting out of some of these cookies may affect your browsing experience.
Necessary Always Enabled
Necessary cookies are absolutely essential for the website to function properly. These cookies ensure basic functionalities and security features of the website, anonymously.
Functional
Functional cookies help to perform certain functionalities like sharing the content of the website on social media platforms, collect feedbacks, and other third-party features.
Performance
Performance cookies are used to understand and analyze the key performance indexes of the website which helps in delivering a better user experience for the visitors.
Analytics
Analytical cookies are used to understand how visitors interact with the website. These cookies help provide information on metrics the number of visitors, bounce rate, traffic source, etc.
Advertisement
Advertisement cookies are used to provide visitors with relevant ads and marketing campaigns. These cookies track visitors across websites and collect information to provide customized ads.
Others
Other uncategorized cookies are those that are being analyzed and have not been classified into a category as yet.
SAVE & ACCEPT
Powered by